Early settlers of the Newbury and Newburyport area celebrated Mass in private homes or sometimes the old courthouse on the Mall in Newburyport whenever a priest was available, which didn’t happen that often because not many priests were available to make the journey to all of the small towns surrounding Boston.

By 1844 enough Catholics had settled in the Newbury/Newburyport area to warrant a church be built. An existing chapel was purchased and moved to Charles Street. This chapel, named St. Mary’s Chapel, was established May 15, 1848. The first pastor, Rev. John O’Brien was then named. As the number of worshippers increased, a larger church was needed. The current church building, Immaculate Conception Church on Green Street, was completed and dedicated on March 17, 1853 under the direction of the second pastor, Rev. Henry Lennon. His parish covered the areas of Newburyport, Newbury, Amesbury, Ipswich, West Newbury Rowley, and Salisbury. Interestingly, the church was built of light-colored brick but the bricks were painted red in 1903 for the church’s 50th anniversary. 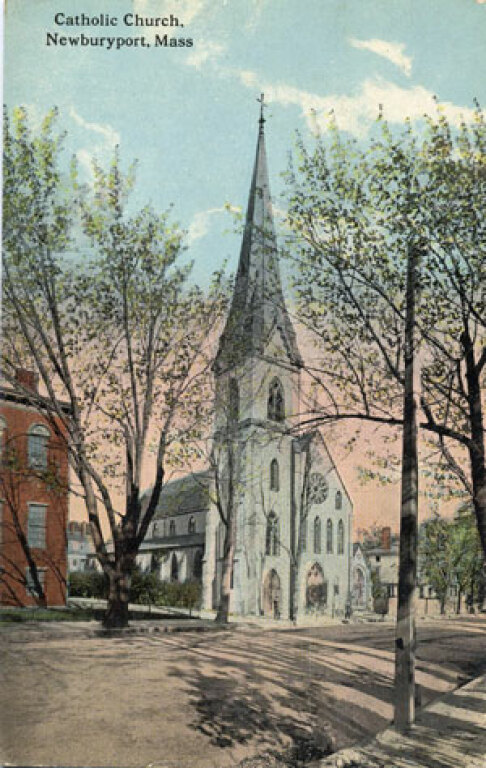 This church had two steeples added in 1873, but the one housing the bell (nicknamed St. Patrick) was destroyed in a fire on May 9, 1945, that started in the old school building and ignited the steeple. The steeple was never rebuilt, but was removed and capped along with the second spire, which was in disrepair, in 1945. This is how the church appears today. 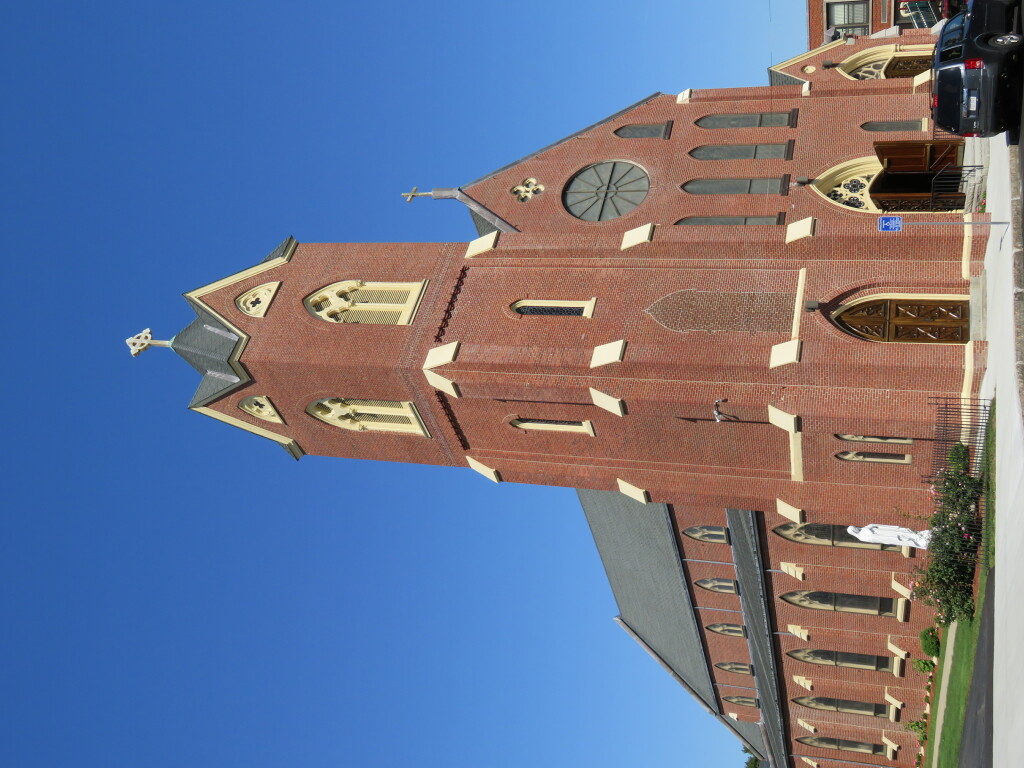 IC as it appears today

Two of the most striking additions inside the IC church, the white marble altar and painting of the Crucifixion, were added in 1903. 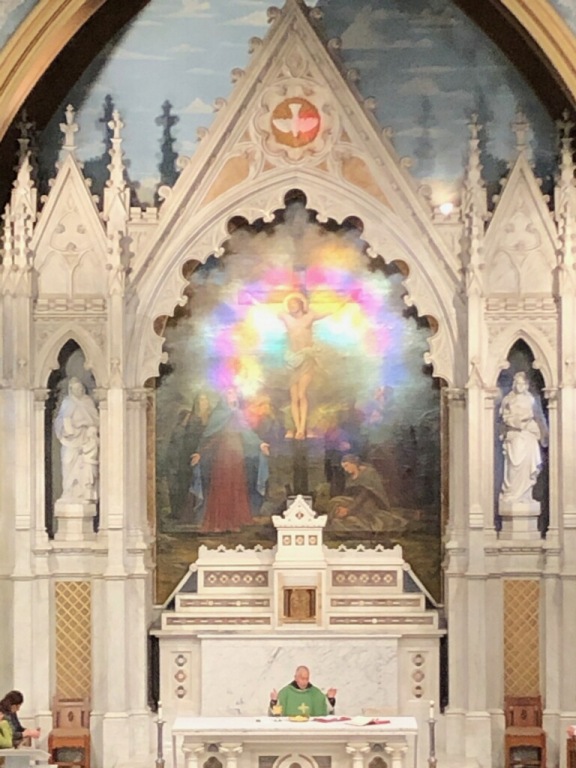 Immaculate Conception grew to include several schools ranging from elementary to high school, a convent, a children’s chapel, a parochial hall, a parochial residence, a cemetery, and a “home for destitute children.”

The current IC Parish Center brick building was built as a convent in 1950. The Parish Center is now used as office space and meeting rooms. 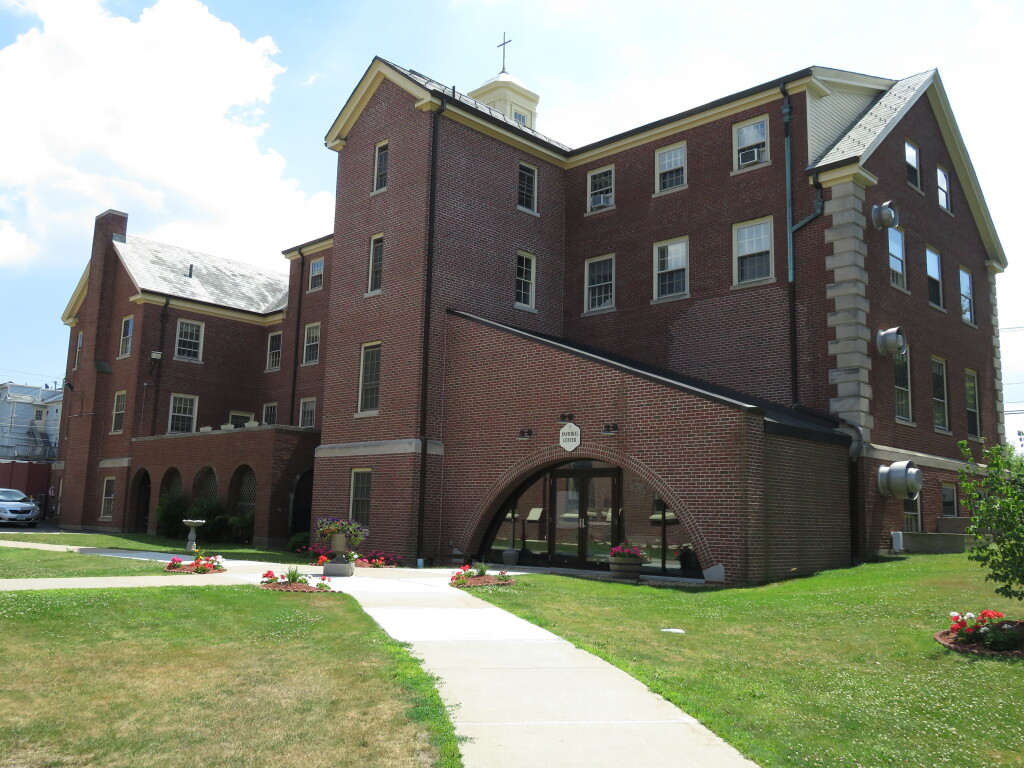 Part of the church’s property includes St. Mary’s Cemetery, a 23-acre piece of land that was purchased by Fr. Teeling on May 4, 1874. This property on Storey Avenue was formerly the training ground for the Newburyport Militia. The cemetery is laid out in the form of a Celtic cross and is a consecrated cemetery. 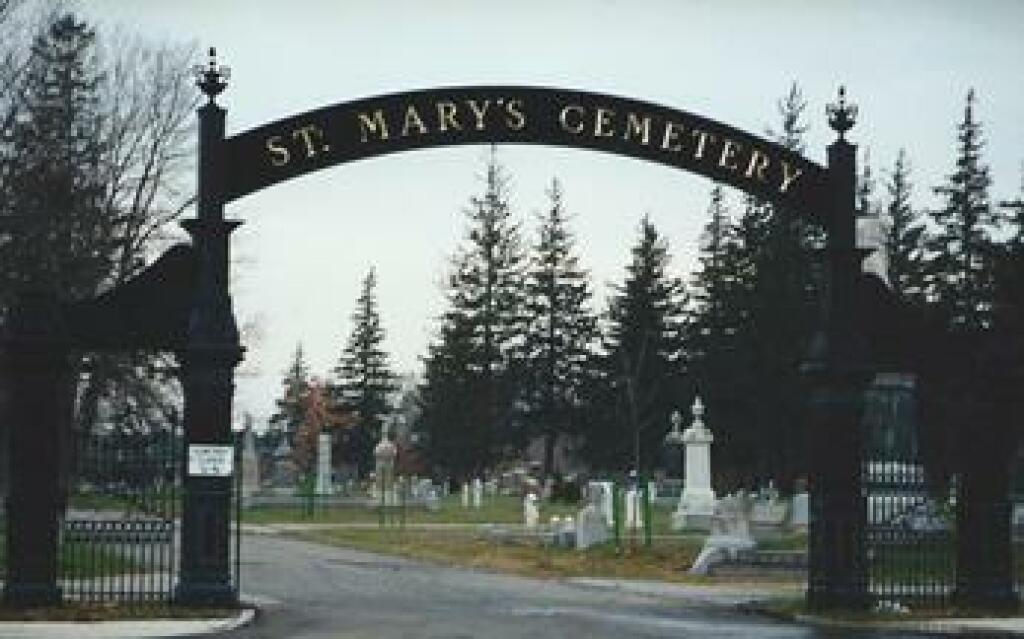 IC School was formally dedicated on May 28, 1881 and was run by the Sisters of Charity of Nazareth. Through the years, many different buildings were used for the purpose of education and many different ages of children—from elementary through high school—were educated.
The present school building was built in 1955 and currently includes children from K–grade 8. The high school was located across from the present school (opposite side of Washington Street) and operated from 1946–1964. 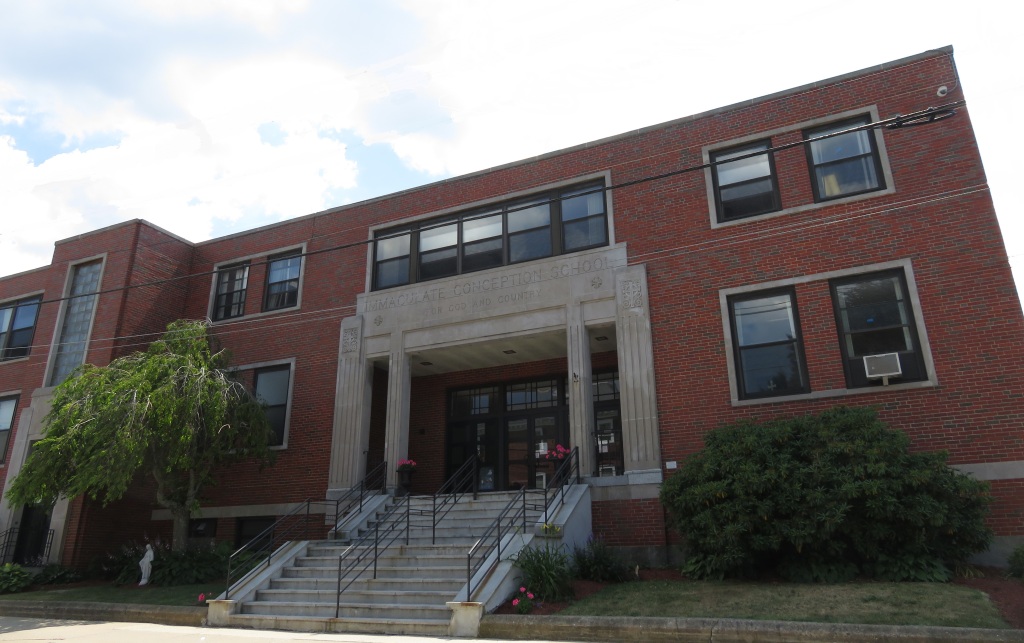 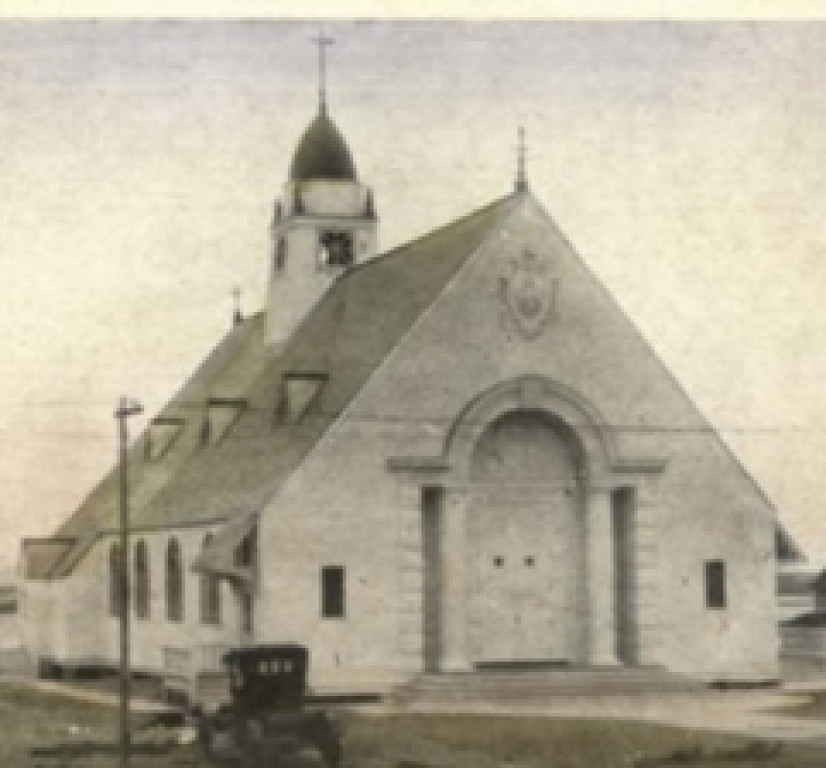 By the early 1900s, many French Canadians began to settle in Newburyport. This French population requested and were granted permission to build their own ethnic parish. St. Aloysius de Gonzague (“St. Louis” as it was fondly called) parish was dedicated on May 30, 1905. The church was on the corner of Federal and Beck Streets in Newburyport. By September 1907 the new parish had built their own school which was run by the Sisters of St. Chretienne until 1923 when the Sisters of Jeanne d’Arc cared for the needs of “The French School,” as it was called, until its closing in 1966.

St. Louis was suppressed on January 1, 1999. The church building was purchased by developers and converted into apartments. 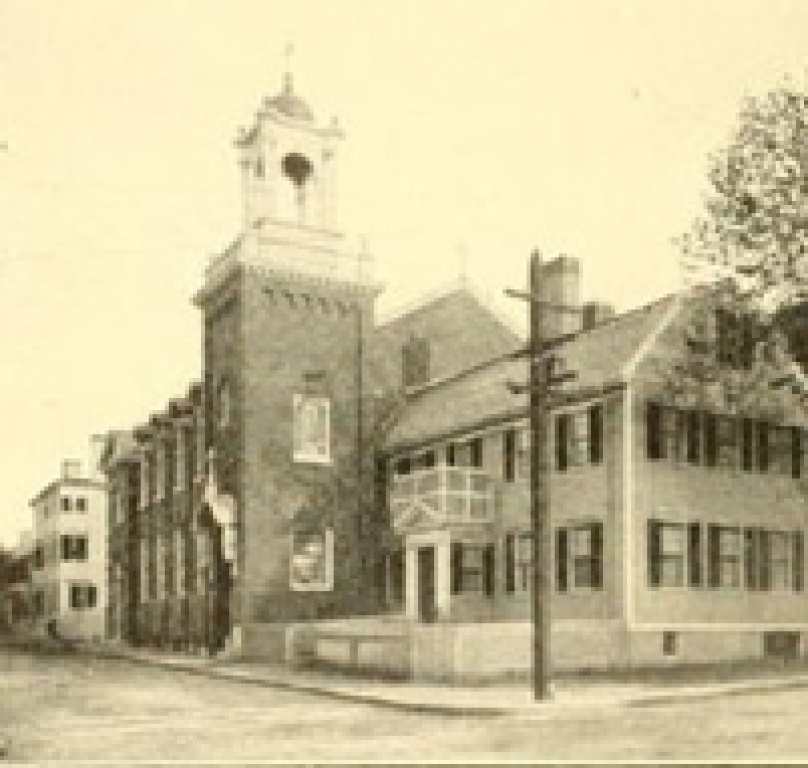 Above: St. Louis Church then; below, current apartments now 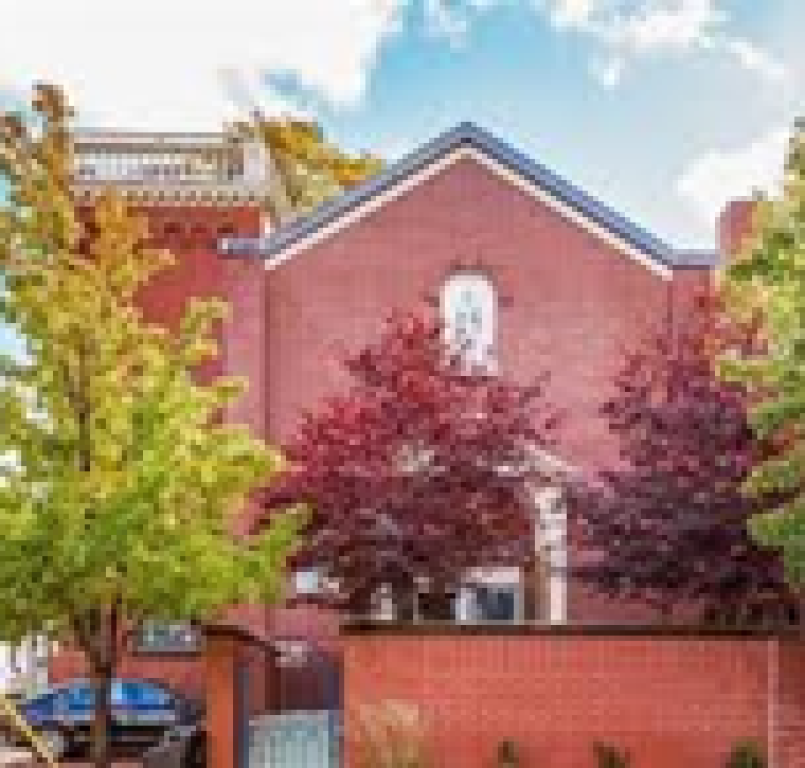 Amesbury, West Newbury, and Merrimac (West Amesbury) need a Church of their own

Amesbury, Merrimac, and West Newbury Catholics made the journey to worship at Immaculate Conception because none of these towns had churches of their own. But by 1859, Catholics in Amesbury and the surrounding communities found they needed their own church. Their numbers were increasing enough to consider a worship place of their own.
They began meeting in a hall in Amesbury and the Rev. Henry Lennon from IC, Newburyport came to minister to them. The Amesbury church, St. Joseph’s, was built in 1866 and remained a mission church of Immaculate Conception until it became an independent parish in 1868 and Rev. John Brady, curate at IC, was named pastor. The worshippers at this new parish included Catholics from Amesbury, West Newbury, and West Amesbury (West Amesbury is now called Merrimac but was once part of the town of Amesbury. Merrimac was incorporated under its new town name, independent from Amesbury, on April 11, 1876.)

In 1884, the Merrimac church construction began on Green Street on the site of the former Foster, Prescott, and Howe Carriage Shop and the church was dedicated in 1885 as Nativity of the Blessed Virgin. The church remained a mission church of Amesbury until July 1891 when Nativity was assigned its first pastor—Rev. Thomas Moylan. West Newbury Catholics became a mission to this new church. 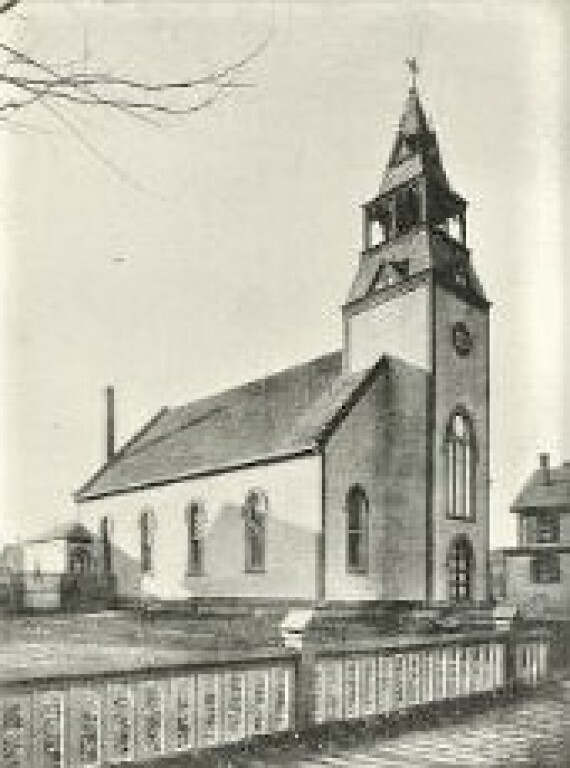 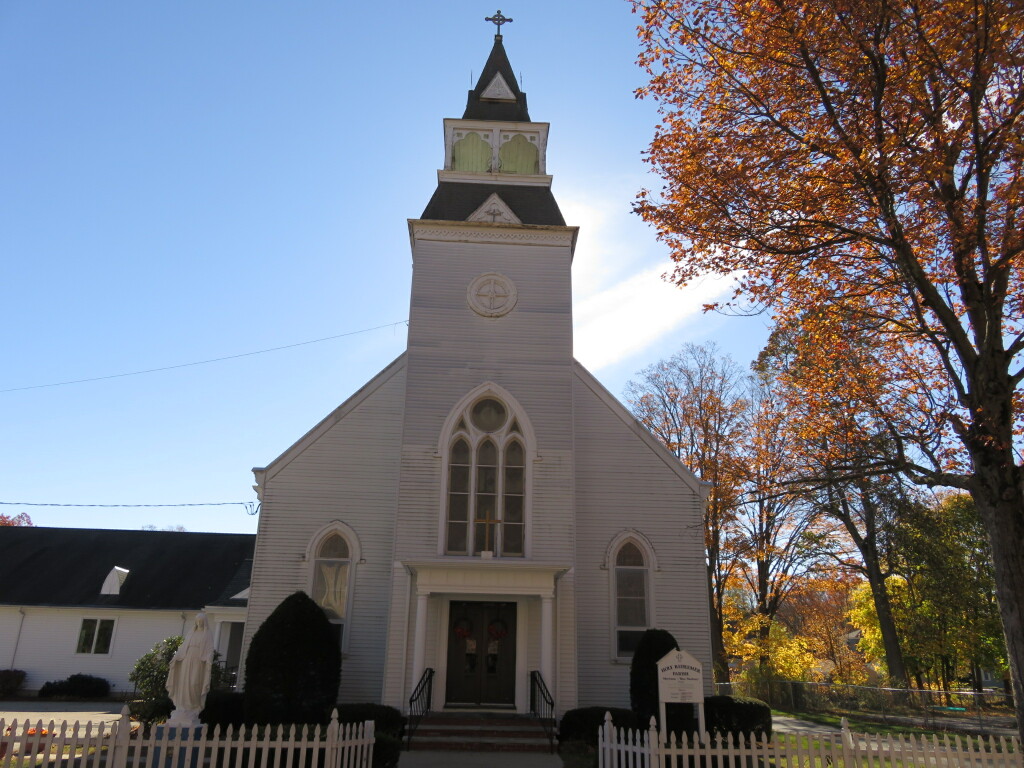 West Newbury Catholics began to worship in West Newbury’s Old Town Hall by the 1860s with visiting priests, from surrounding parishes. Fr. Cummings was not able to begin the work of building a church of their own in West Newbury because of his age. His successor, Fr. McClure, began raising funds for the purchase of the land and building of the church on the corner of Main and Church Streets, the location of the current church. Around 1891 South Groveland, Groveland, and Georgetown were detached from St. Ann. Merrimac and West Newbury were joined at this time. 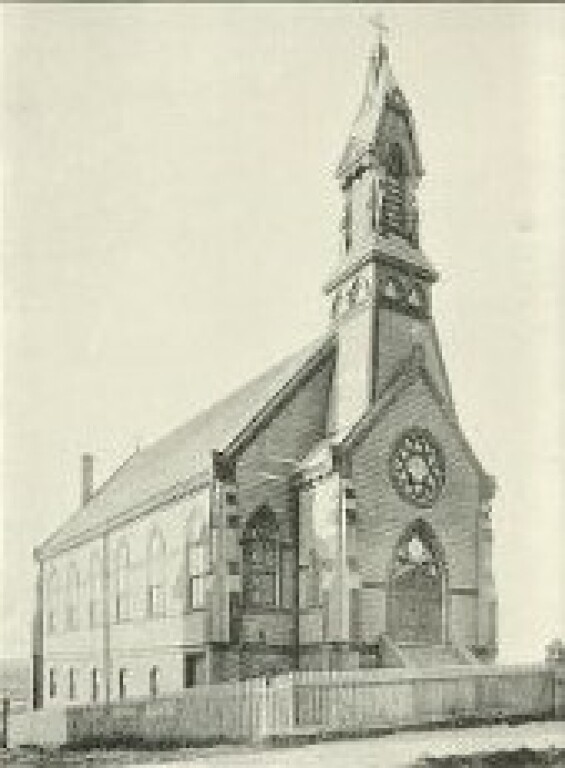 The first Mass was celebrated in the new church on Christmas Day 1879 and it was dedicated on May 2, 1880 and remained a mission church of Merrimac’s Nativity Church until 1945. In 1945, St. Ann became a separate parish and was assigned its first pastor who resided at the parish house on Maple Street. The official name of the church is St. Ann (no final “e”) although the church’s rose windows are inscribed with the final “e” (St. Anne). 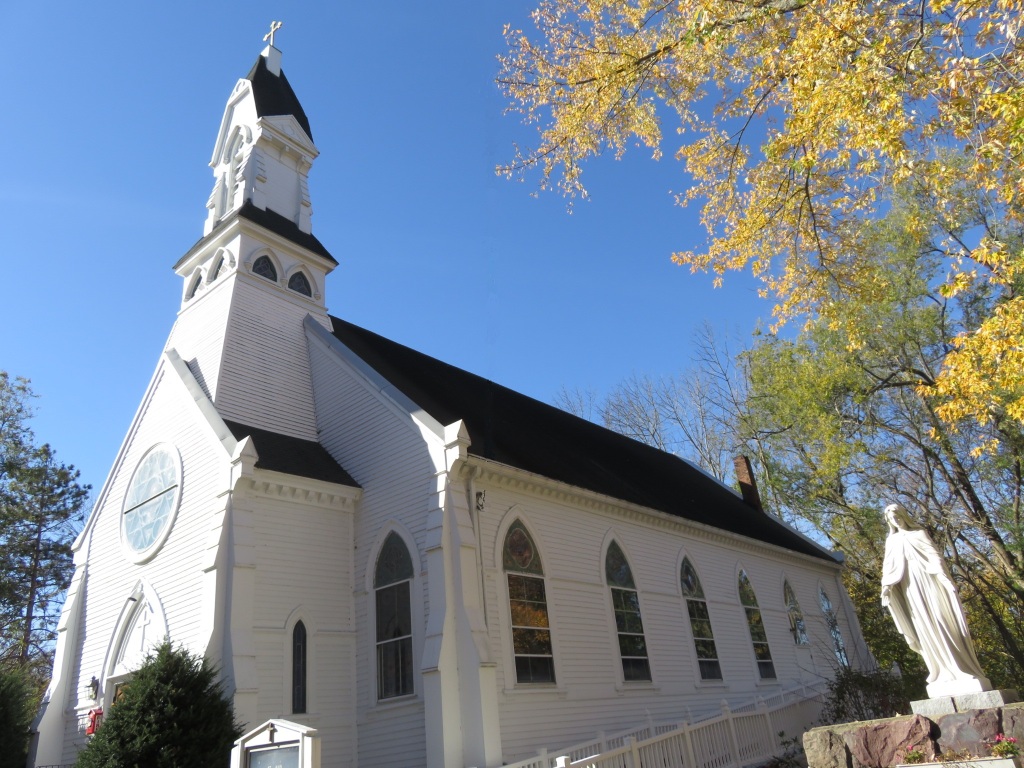 St. Ann and Nativity were once again united on October 30, 2006 under the new name of Holy Redeemer Parish which included the two worship sites of Nativity, Merrimac and St. Ann, West. Newbury. Fr. Edward Sherry was named the pastor of the newly formed Holy Redeemer Parish.

In 2015, through the Archdiocese of Boston’s Disciples in Mission: A Pastoral Plan for the Archdiocese of Boston, the Holy Redeemer – Immaculate Conception Collaborative was formed. Fr. Timothy A. Harrison was appointed pastor of the new HRIC Collaborative on June 2, 2015. This Collaborative, which is a grouping of parishes that share a Pastor and many resources—includes the two parishes: Holy Redeemer (which includes Nativity Church, Merrimac and St. Ann Church, West Newbury) and Immaculate Conception Church, Newburyport. As a Collaborative, we created a Pastoral Plan that was completed and submitted to the Archdiocese of Boston in 2017. The components, or priorities, of the Plan include becoming a welcoming community, creating intentional discipleship, increasing all vocations, and promoting service and ministry opportunities. As we continue our journey as the HRIC Collaborative, we want to cherish our rich beginnings and bring all our parishioners together to form an active and vibrant faith community.